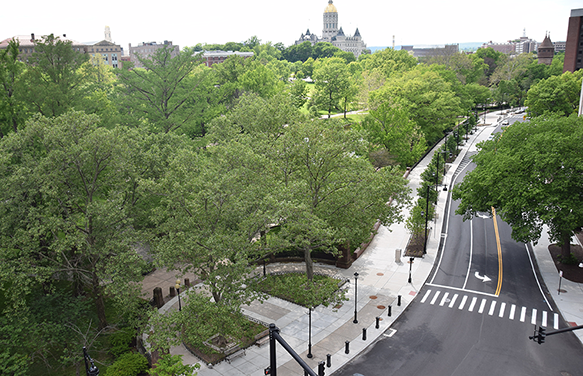 The American Society of Landscape Architects has presented the City of Hartford with a Merit Award for Bushnell Park North, the half-mile complete street and urban promenade designed by Suisman’s multidisciplinary team. Bushnell Park North is the signature project of the iQuilt Plan, the award-winning urban design master plan for downtown Hartford.

Beginning in 2008, Suisman and its team spent two years creating the iQuilt Plan, which was adopted by the City of Hartford in 2011. In 2012, Suisman helped the City applied for and win a highly competitive Federal TIGER grant for $10 million, much of it earmarked for construction of Bushnell Park North. Construction began in 2013 and was substantially completed in 2016.

The project is located along the north side of Bushnell Park, the nation’s first publicly funded urban park, and extends one-half mile from the transit hub at Union Station to Main Street.  The design narrowed the travel lanes from four lanes (50′) down to two lanes (22′) in order to calm traffic and create the space for the new 30′-wide Horace Bushnell Promenade, a pedestrian and bike-friendly public space named after the park’s visionary creator. The Promenade is the first expansion of Bushnell Park in 150 years, adding more than 2 acres (81,000 sf) of sustainable, walkable public space, and reclaiming some of the park space that was lost to roadway widening in the 1950s.

The Promenade includes a new brownstone perimeter wall for sitting and leaning; 80 new street trees for shade and foliage; 36 linear rain gardens; 15 shorter and safer crosswalks with protective bollards leading to and from the park; 60 new energy efficient pedestrian and roadway lights; 30 new benches; and 6 new or enhanced brownstone gateways into Bushnell Park.