The new campus for Emily Carr University of Art + Design in Vancouver is organized along a west-to-east linear sequence of public spaces, with a major north-south cross-axis at the center of the campus.  The school is extended along and on both sides of the proposed pedestrian street, and blends in with neighboring development.  This approach allows the new campus to retain some of the urban vibrancy of its original campus on Granville Island while allowing overlapping uses, mixing campus studios with professional offices, incubator spaces, workshops, housing, cafes, retail, greenhouses, etc.  East First Avenue becomes an important pedestrian, bike, and symbolic gateway street from downtown and the proposal anticipates an eventual passage under the West Gate to provide level access to the campus and vertical access to the future Skytrain station below ground. 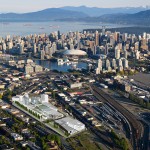 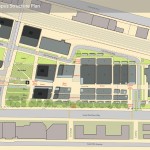 Campus organized along a linear sequence of public spaces 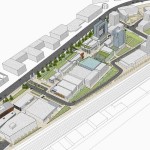 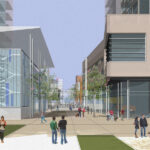 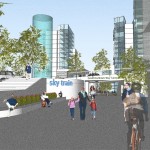