Doug Suisman joins key Hartford leaders on WNPR to talk about the ongoing efforts to revitalize downtown Hartford, through the efforts of the State of Connecticut, the City of Hartford, business interests, and cultural institutions, including the iQuilt Partnership:

The iQuilt Partnership hosted its second Creative Cities Conversation, featuring Leslie Koch, President and CEO of the Trust for Governors Island and Doug Suisman who led the conversation.

The first major piece of Hartford’s iQuilt Plan has broken ground.  A road diet has given shape to Bushnell Park North, a pedestrian promenade lining the northern edge of Bushnell Park.

The Hartford Parking Authority (HPA) has asked Suisman Urban Design to help renovate its massive, 8-level, 1300-space Church Street Garage in downtown Hartford. The garage is highly visible from I-84, and stands directly across the street from the XL Center, Hartford’s main sports and performance arena. The design uses color, graphics, lighting, and wayfinding to help connect the parking facility with downtown’s increasingly vibrant pedestrian network, as envisioned in the iQuilt Plan. The project is funded by HPA with support from the iQuilt Partnership.

I can still remember my excitement, as an eight year old kid, when the Phoenix Building opened on Constitution Plaza in downtown Hartford, my hometown. When visitors came to our little provincial capital, we boasted we had the world’s first and only two-sided building (to our young ears it sounded like a wicked trick question – wouldn’t a two-sided building be flat?). The two curved sides of architects Harrison & Abramovitz’s elegant headquarters for one of our many insurance companies looks as fresh, modern, and elegant today as it did then. Modernist architecture has a reputation for being cold, intimidating, and colorless. The “boat building”, as it is still lovingly called in town, is warm, surprisingly intimate, and gorgeously chromatic with its blue-green glass and honeyed wood paneling. 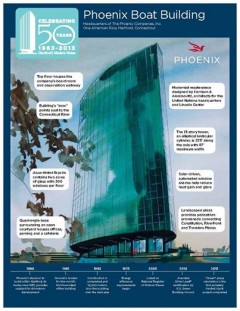 When Frank Gehry’s Bilbao Museum rose in the 1980’s, the term “iconic architecture” was widely used to describe its elaborate sculptural forms. But the Phoenix Building was an icon long before Bilbao. The building just celebrated its, and I was delighted and honored to be asked to speak at the ceremony, mainly because the Phoenix is a key landmark in our iQuilt plan for downtown Hartford. The centerpieces of the plan is the GreenWalk, a one-mile chain of green spaces running from the Connecticut Capitol to the Connecticut River, and the Phoenix building and plaza sits at a major crossroads of the GreenWalk.

So it was a happy confluence of events that when the Phoenix decided it needed to repair its fifty-year-old roof terrace surrounding the building on Constitution Plaza, it used the occasion to “green” the roof rather than just repave it. It turns out that converting the terrace into a garden, and making an integral part of the GreenWalk, cost less than repaving! And the money was already going to be spent by Phoenix in any case, meaning that a major public benefit was provided with private funds. that kind of public-private cooperation is a key premise of iQuilt.

The spur for the green roof was Bonnie Malley, now the #2 at Phoenix. She was inspired by the iQuilt and the Greenwalk, and got the Phoenix leadership to agree to the garden plan. But she didn’t stop there — she agreed to become the chair of the iQuilt Partnership board, and has been doing an extraordinary job of shepherding the plan forward.

Doug Suisman joined the leaders of Phoenix and the mayor of Hartford to celebrate the 50th anniversary of Phoenix’s famous modernist landmark “boat building” and to cut the ribbon on a new green terrace surrounding. The landscape project is a key piece of the iQuilt Plan’s one-mile Greenwalk, a continuous pedestrian walkway from the State Capitol to the Connecticut River. Cutting the ribbon were James D. Wehr, Phoenix president and chief executive officer; Phoenix executive Bonnie Malley (who is also chair of the iQuilt Partnership); and Hartford Mayor Pedro Segarra.

Suisman Urban Design and its client, the iQuilt Partnership and the City of Hartford, have received the Award of Excellence from the Connecticut Main Street Center. The award was given to Suisman’s iQuilt urban design plan for downtown Hartford, in the category of Public Space Master Plan. Suisman has been progressively designing and supporting the implementation of the comprehensive plan since 2008. “Connecticut’s city centers are critical drivers of commerce and competitiveness,” said Governor Dannel P. Malloy. “I applaud the 2013 award winners for their efforts to make Connecticut’s downtowns thrive.”

The iQuilt Partnership has won a highly competitive placemaking grant from the State of Connecticut’s “Arts Catalyze Placemaking” (ACP) Program. Suisman Urban Design will lead development of iNSIDE/OUT, the iQuilt’s project focusing on a collection of beta sites that will demonstrate a wide variety of ways to externalize Hartford’s cultural assets. Pilot projects will be sited in different parts of downtown, notably along Church Street, which is home to Christ Cathedral, Capital Community College, and the Hartford Stage Company.

iQuilt project included in new book, "The Car in 2035"

he CARSuisman Urban Design’s work in Hartford has been included in a new book offering a refreshingly multifaceted view of the combined future of cars, streets and policy: “The Car in 2035: Mobility Planning for the Near Future.” Essays and images present the car as both a challenge and benefit to our neighborhoods, cities, and suburbs. A lively mix of auto industry experts, planners, designers, artists, researchers, and architects contemplates how we will adapt our cars and their context so we can continue to enjoy the freedom and benefits of individual mobility in the future.