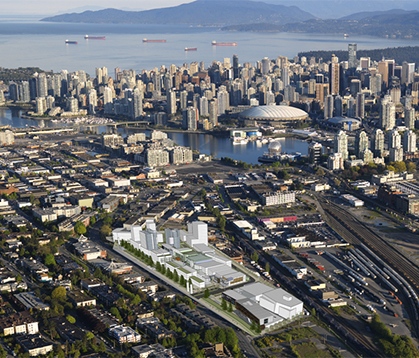 Emily Carr University of Art + Design, Canada’s pre-eminent art school, has just opened its new, $122 million campus in Vancouver. The opening celebration capped the nearly 10 years of planning and design required to relocate ECUAD from its long-time downtown campus on Granville Island, which the school had outgrown, to a large industrial site that was the former home of manufacturer Finning International. In late 2012, well into the planning process, ECUAD President Ron Burnett reached out to Suisman Urban Design to help solve a problem: ECUAD leaders were unhappy with the proposed campus site plan. Suisman was asked, on short notice, to develop an alternative urban design framework, site plan, and campus vision that would satisfy the complex needs of Emily Carr, a consortium of private developers, and the Province of British Columbia. The solution developed by Suisman within a four-week deadline was approved by all parties at the end of 2012, and one month later the Provincial government approved $113 million for the project. Though aspects of the real estate arrangement subsequently changed, many of the key features of Suisman’s design, particularly its lateral orientation and connectivity to adjacent urban areas, can be seen in the final campus layout and building, designed by Schmitt and Diamond of Toronto. President Burnett was honored for his tenacious efforts with the naming of the Ron Burnett Library and Learning Commons. ECUAD is home to 2,300 faculty, staff and full-time students, as well as another 3,000 continuing-studies students.