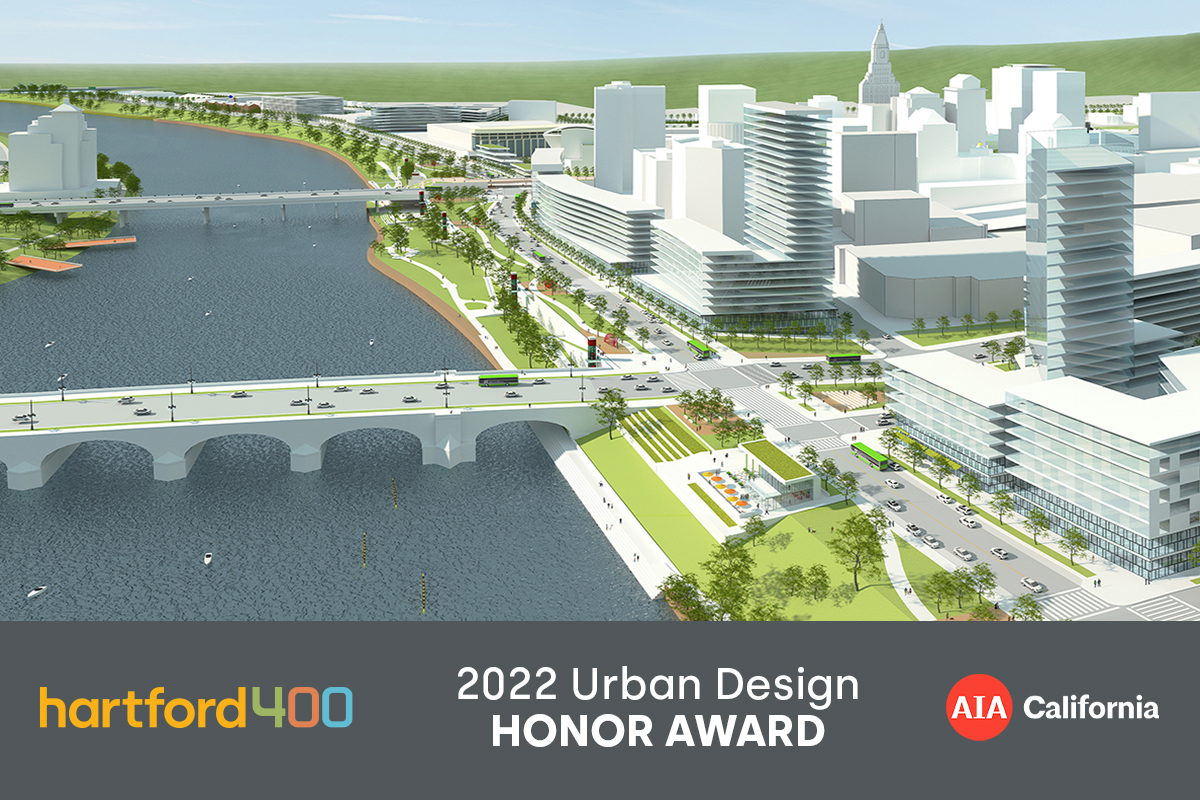 The Hartford 400 plan is a broad, river-centered vision for the 1,000 square mile Connecticut Valley region around the capital city of Hartford. A wide range of projects and programs, from highway and bridge reconfiguration to new parks and trails, are integrated into a comprehensive vision timed for completion in 2035, the 400th anniversary of the region’s urban settlement.

In announcing the Honor Award, AIA California said the plan offered “a fascinating glimpse at reclaiming and reinventing urban landscapes,” calling Hartford 400 “an ambitious plan to rethink the riverfront of Connecticut’s capital region.” The six-member jury of design professionals lauded “an excellent plan for the heart of Hartford…it deploys unifying and livable strategies to solve the problems of the previous generation of urban planning, and reimagines the next generation of cities.”

Jury member and planner Stephanie Reich praised Hartford 400 for its “truly excellent urban design and exceptional presentation.” Another jury member, UCLA landscape architecture director Stephanie Landregin, said, “Hartford 400 is very impressive – a thoughtful and bold plan that goes beyond remedying the transportation issues by undergrounding the interstate to create a riverfront greenway, as well as redesigning the city’s highways and interchanges to create wetlands, parks and exciting new public spaces.”

Hartford 400 creates a comprehensive, river-centered vision for Connecticut’s capital city and the Connecticut Valley region. The plan envisions a major reconfiguration of the region’s infrastructure – highways, railroads and floodwalls – to remove historic physical and racial barriers between neighborhoods and the largely inaccessible riverfront, and to re-establish the Connecticut River as the heart of the city and region. By removing, reconfiguring, or covering the web of interstate highways in the urban core, the plan opens up new land for parks, greenways, public spaces and mixed-use development, all served by new boulevards and bridges supporting transit, biking, and walking. A growing network of transit lines and stations help link and energize the region’s nearly 40 historic town centers, serving 1.1 million residents. The overall goal of Hartford 400 is to make the Connecticut Valley and its capital city more sustainable, prosperous, equitable, mobile, and vibrant, with substantial completion of the vision by 2035, the 400th anniversary of urban settlement in the region.

Hartford 400 orchestrates three transformative urban infrastructure projects including treatment of an elevated freeway in its path: “River Road” caps an obstructing freeway and floodwall to provide access to riverfront parkland; “Midtown” replaces a massive and wasteful highway interchange with a new walkable riverfront district; “The Hartline” converts a divisive rail and highway trench into a lateral urban greenway. Together, the three projects remove or mitigate historic infrastructure barriers that have isolated minority and working class neighborhoods both from the riverfront and the region.